I am basically the queen of to-do lists (long may I reign!) and basically everyone knows it. If you didn’t know it, now you do.

But seriously. I have a ton of to-do lists.

I have a bullet journal full of lists, a grocery list in the notes section of my phone, a planner full of lists (more on that later), and my whiteboard list.

As much as I loooove to write everything down on paper (and I do), paper costs money, plus, sometimes what I need to do changes and then I have to scribble stuff out. I have an hourly planner that I print out when I have a really busy week, and that helps get me scheduled down to the half hour, but sometimes…you just need something really, really flexible.

I bought this tiny little green whiteboard (greenboard?) at Target in the $1 section thinking I’d use it for the kids to write on. They do, occasionally. But somehow it transformed into the best to do list medium ever. 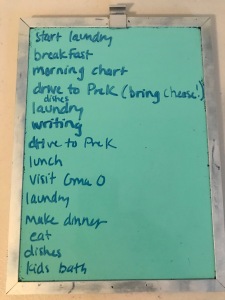 Ignore the messy frame. Children helped me decorate it in grime. They are such good helpers.

And, actually, my list for today has already been erased and redone on the handy-dandy whiteboard because somebody (a cranky four year old perhaps?) threw up on the way to preschool so guess what, we aren’t going.

It’s not really revolutionary, but it’s helpful. The night before or the morning of, I sit down and write everything I need to get done down, in order…even the stupid nitty gritty stuff like dishes. I even repeat myself occasionally, like on laundry day when I need to keep going back to the laundry room.

The satisfaction of crossing something off (wiping something off the board feels pretty good too) while also not wasting a paper that you’ll have to change fifty billion times as the day changes is pretty great. Something comes up? I erase and rewrite with a swipe of a rag, or just add something in quickly. It’s small, magnetic, and has a handy little clip for a marker. It’s just…happy sigh.

I use it for other things too.

Sometimes I make a list of accomplishments. Instead of writing down what needs to happen, I write down every little thing I do get done. Got up. Got dressed. Ate breakfast. Helped Fish get dressed. Read a book to the boys. Got distracted by a phone call. Did 30 sit-ups. (Heh…I can dream, right?) The point is sometimes it feels good to look back at the day and see, “wow, I do a ton!”

Occasionally I start explaining things to the boys and need to draw a picture. Handy dandy whiteboard to the rescue! I either draw something to the side or erase and rewrite my list in a minute (often, that’s a good thing, because then I can fit the afternoon/evening list instead of the morning/afternoon list). Octagon vs. hexagon discussion: boom done. How Red could improve his letter A: also done.

I think the little whiteboard is super useful, but that’s just me.

How do YOU organize your day?

What little thing makes keeping organized so much easier for you?

Mom. Writer. Blogger. ENFJ. Caught in the endless clean-mess cycle of having young kids. Have a happy day! 😁 View all posts by Hailey

1 thought on “My Go-To Way to Organize My Day”

Sweet Stuff on Other Platforms

As an Amazon Associate I earn from qualifying purchases. Thank you!
Advertisements

As an Amazon affiliate, I earn on qualifying purchases. Thank you!